Cycling in Costa Brava is one of the best experiences you can live upon your bike.
Amazing roads, sunny, beside the sea. Solitaire roads in spite of being close to big touristic destinations as Lloret de Mar or Platja d'Aro. Road from Tossa de Mar to Sant Feliu de Guixols should not be missed by anyone who loves cycling.

Montefusco Cycling is offering you the possibility of cycling there in a private cycling tour. Even if you are staying in Barcelona, this is close enough to get there in just one hour. In our tours we include bike rental, cycling guide and even transportation if needed.
More information:  http://www.montefuscocycling.com/#!day-trips/cz6u

Some comments of our customers:
"With a free Sunday after a family vacation in Barcelona, Claudio led me one of the best and most scenic rides of my life along the Costa Brava. The Tossa de Mar to Sant Feliu section (described on his website/blog) is not to be missed. Incredible day - rollers, good climbs, and that beautiful stretch along the coast - all wrapped up by mid-afternoon."

One of the bike brands we trust is Orbea. We have many bikes of them and we are really satisfied.
Orbea is a basque brand. Was created in 1840! A history of over 175 years. 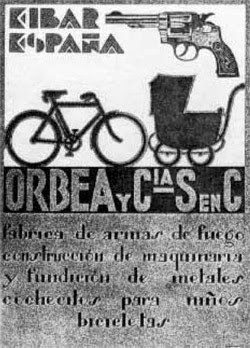 Orbea Hermanos was created in Eibar as a gun factory 1840. Founders were brothers Orbea: Juan Manual, Mateo, Casimiro and Petra Orbea Murúa. By 1906 had 406 workers and exported 90% of production. About to begin Civil war in Spain, slowly, beside producing guns, the factory began to produce also bicycles.

At the end of the civil war, Orbea was producing over 50,000 bikes per year, but by middle sixties demand of bicycles went down. In 1969, with 1.500 workers, the factory gets the lowest point and is about to close. The only way of surviving was creating a Cooperative, so the workers could keep the factory... and their jobs.

One of the brightest moments in Orbea history was the sponsorship of pro team Orbea-Gin MG, in  middle eighties, with Perico Delgado winning Vuelta a España in 1985 and doing great Tour de France performances. By that time, Orbea's strategy was linked to pro competition. Lately, Orbea also sponsored and provided racing bikes to Euskaltel Euskadi pro Team.

Nowadays Orbea has three factories, the main one in Mallabia (Basque Country) with 180 workers, another one in Portugal and third one in China, both with 50 workers. Factory in China is selling to growing american and asian market.

In Montefusco Cycling we like Orbea bikes and many of our rental bikes are bought to this factory. Orbea, we trust.