Montjuic, the Olimpic mountain in Barcelona

(Pictures Sergi Ros de Mora, www.rosdemora.com)
Montjuic is a very special place for people living in Barcelona and passionate of sports.
Obviously the main thing to visit is the Olimpic Stadium. We will never forget the Olimpics in 1992. Already part of the best history of this city, Barcelona. Note also that beside the Stadium it is the Olimpic Museum Joan Antoni Samaranch. It is worth a visit.

Need to know that the Olimpic Stadium was built in 1927, inicially for the World Exhibition in 1929. With not much use, the stadium was deteriorated in the 70's and 80's till the Olimpics were given to Barcelona and the Stadium was rebuilt. Close up was built Palau de Sant Jordi, a nice multisport center (see picture) where have been played a Davis Cup final, a Final Four Basketball finals, and many many concerts...
But for cycling fans and passionates, Montjuic is also a very special mountain.

The Cycling World Championship took place there in 1973 and 1984. Both were great Championships. In 1973 the winner was Felice Gimondi for Italy, in front of his 3 mates in an imperial breakway: Luis Ocaña, Freddy Maertens and Eddy Merckx. Incredible race. In 1984 the winner was Claude Criquielion for Belgium, ahead of italian Claudio Corti and canadian Steve Bauer.

Being so close of the city center, in its steep slopes took place the Escalada a Montjuic, from 1965 till 2008, always at the end of the european season, a kind of farewell season race. A celebration of cycling with many people supporting the riders. Since then, the economic problems for the organisation made the race disappear. Recordman of the race stays Eddy Merckx, with six victories.

Other sports are present in the Olimpic Mountain: Swimming Pools, Rugby fields, Climbing, etc. A mountain married to sports.
Publicado por Claudio en 4:22 AM No comments: 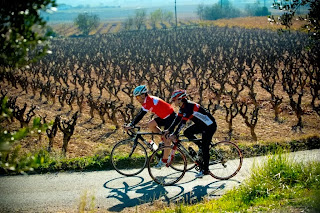 (All pictures courtesy Sergi Ros de Mora)
The comparison with the italian Tuscany is too obvious. The problem would be to know which one is the nicest area to ride your bike. Vineyards, solitaire roads, mild weather, soft climbs... Is there a paradise for cyclists? It should be not far from there. Visiting the wineries, the well known catalan cava, and remembering the old saga Falcon Crest... All in all, just minutes way from Barcelona!
Publicado por Claudio en 12:06 PM No comments:

Things to do in Barcelona


Sure you can ride in Barcelona, in a lot of fantastic places. A Tour including climbs as Coll de Parpers, Forat del Vent, or Tibidabo, and afterwards a touristic vision of the city: Sagrada Familia, FCB Stadium. Lots of things to do in Barcelona with your Bike. The american customer of Veloce Bike Rental and Montefusco Cycling will tell you... Rent your top Quality bike in Barcelona, in Montefusco Cycling.
Publicado por Claudio en 5:28 AM No comments: 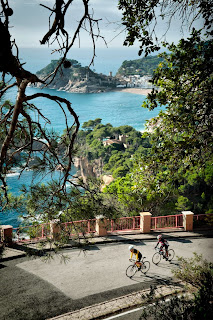 "Over the past 15 years, Girona has become a seasonal home to roughly 40 professional cyclists from around the world. Attracted by the climate, proximity to the ocean, mountains, airports and quiet roads, Girona has progressively become an epicenter for English-speaking cyclists in Europe."
Read the complete article in Bicycle Magazine Canada:
http://cyclingmagazine.ca/sections/ridesevents/international-bike-travel/riding-in-the-pros-backyards/ 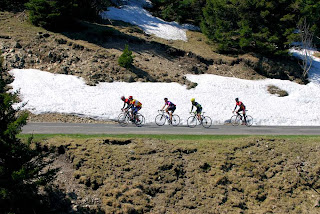 (Pictures Sergi Ros de Mora)
Montseny mountain is really close to Barcelona. You can reach it from the big city and also from the Barcelona north coast and also from the Costa Brava. The  highest elevation of Montseny is Turo de l'Home, at 1700 meters. One of the steepest roads in whole Catalonia, a real challenge for strong cyclists, if you are thinking of a cycling vacation. But no need to climb up to the top. You can reach Coll Formic or Santa Fe del Montseny. Solitaire roads climbing the mountain in which you can enjoy incredible landscapes, specially in autumn. Can you believe that picture at the beginning? No trick, no photoshop. A good shot no doubt, but leaves were there, the road was there, the light was that. Would you like to ride up there? Montefusco Cycling is providing top quality bikes for your cycling vacation in Catalonia.
Publicado por Claudio en 2:12 AM No comments:

(Photos courtesy Sergi Ros de Mora)
Do you want to discover Barcelona in a different way?? Enjoy your cycling vacation in Barcelona riding a top quality bike. It is not about riding fast, it is about enjoying one of the most amazing cities in the world. We have designed a tour in which you will be able to discover the long bike lane (5 km) beside the river Besos, full of runners, cyclists, walkers. To discover the Forum area, and beside the sea, follow the bike lane till Hotel Vela, the great spectacular mirror faced, sail shaped hotel. Afterwards, climb the Olimpic mountain Montjuic to visit the Olimpic Stadium and Palau de Sant Jordi, where the Olympic took place in 1992. Let's go on crossing the city and visiting Sagrada Familia. Finally, let's climb one of the hills to have an aerial view on Barcelona and see the Velodrom fom above. Incredible Tour 70 km long. Sport, leisure, tourism... Barcelona
Publicado por Claudio en 1:22 AM No comments:

Is it worth sending the bike by plane? 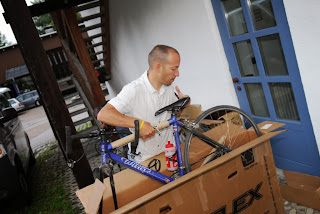 Just a few numbers for your information. If you are coming to Barcelona by plane and you want to enjoy your passion: bicycle. If you send it by plane, average cost is 100,00 Euros (depending on the company, but 2013 prices are 50,00 Euros per flight in Ryanair, 75,00 Euros per flight in Iberia, 45,00 Euros per flight in Vueling). Furthermore you assume the risk of some accident during the transportation. Consider also the time to pack and unpack the bicycle.
Example: Cost of sending (and back) your bike by Ryanair: 100,00 Euros. Cost of renting your bike for 3 days in Montefusco Cycling: 90,00 Euros. And without risks, without losing your time.
When you come to Catalonia in general, Barcelona in particular, and you want to ride, then do not hesitate, rent a quality bicycle (carbon frame) in Montefusco Cycling. Your best choice.
Publicado por Claudio en 2:26 PM No comments:

Montserrat, the holy mountain for Catalan people, one of the greatest touristic attractions of our country. And also a real challenge to climb up there. Do you know that climbing here to rengrace the black Virgin of Montserrat (La Moreneta) is a classic among the catalan people? Do you want to pray for anyone or anything? Then you are in the right place.
Being self guided or with a guide (recommended) the views of the mountain are spectacular! Surrounding the mountain you can see different shapes, the mountain changes. An incredible experience. Do not miss it!!!
Publicado por Claudio en 2:18 AM No comments:


From spring 2014 we are offering also stays in Caldes de Malavella. 2 nights and 2 fantastic rides from a lovely village between Girona and the Costa Brava. Caldes de Malavella is a termal village, home of the well known "Vichy Catalan". From Caldes de Malavella you can reach the scenic road beside the sea between Lloret de Mar and Sant Feliu de Guixols. One of the best roads to cycle in whole Europe, no doubt. Nice weather guaranteed!
Publicado por Claudio en 2:06 PM No comments: