Cycling in Andorra, the mountains country

Andorra has always been a paradise for skiers. The little country between France and Spain consisting basically in a busy street plenty of shops and hotels is now getting into the cycling world. In fact the history of Andorra and cycling is pretty old starting in the '60 when Tour de France arrived to Andorra via Port d'Envalira in a famous stage (year 1964) in which Jacques Anquetil was dropped of the group. But it has been recently that Andorra is also becoming very popular as a living place for many professional cyclists. Obviously it is a fantastic place to train in the mountains. Also, a good place to pay less taxes (Andorra is reputed as a tax free country).

The amount of climbs in Andorra is certainly astonishing, let's give a short list of some of the most important climbs you can find in Andorra:

- Port d'Envalira, 2407 mts height. The highest asphalted road in the Pyrenees. Pity that it is a pretty busy pass between France and Andorra, specially on the south side. The top is filled with Oil Stations and shops which makes the top very little appealing for cyclists. The climb from Ax les Thermes is, nevertheless, a much more interesting road, which gets to the top in 35 km with an elevation gain of 1700 mts. Not many climbs have these numbers!

- Port de Cabus: 2300 mts. A road leading to Pal (village and ski station) and afterwards to Coll de la Botella. Then the roads leads nowhere with summit at 2300. From that point you can get a gravel path to Catalonia. Said to be a smuggler way (to get tobacco out of Andorra).

- La Gallina. Recently asphalted on both sides, La Gallina has become one of the most important and steep climbs in Andorra. Very popular also thanks to the Granfondo "La Purito" celebrating in August. A monument dedicated to Joaquim "Purito" Rodríguez is on top of La Gallina. Vuelta a España arrived for the first time to La Gallina on 2012 (winner Alejandro Valverde), then also arrived on 2013 (winner the italian Daniele Ratto)  2018 (winner Enric Mas).
Details of the climb: http://www.ramacabici.com/altimetrias/gallina.htm

- Collada de Beixalis: Also a recent discovery for cycling and the perfect mate to Coll de la Gallina (this is why they are usually included both in same stage). Very steep as its brother, but a little shorter.

- La Rabassa: A classic climb from Sant Julià de Lòria with 2 sides doing a loop. At the top of Bosc de la Rabassa there is the Naturlandia Adventure Park. It has been stage ending in Vuelta a España 2008 (winner Alessandro Ballan) and 2018 (winner Thibaut Pinot), and has been included in stages a number of times. 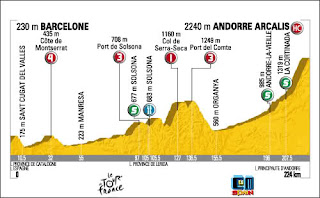 - Ordino-Arcalis: Summit at 2225 mts height, Ordino Arcalis has been stage ending several times in big tours. The most important ones are of course the Tour de France 1997 (memorable Jan Ullrich victory in stage Luchon Andorra), 2009 (stage Barcelona-Andorra, which winner was Brice Feillu), 2016 (Tom Dumoulin winning in the rain). Also Vuelta a España arrived to Ordino Arcalís years 1994-1999-2000-2001-2005 and 2007.
Details of the climb:

- Coll d'Ordino. If I have to choose one climb in Andorra it would be Ordino. Beautiful twisty scenic solitaire road. And as most of the climbs in Andorra every km you have a road sign indicating the km and the gradient. aside of the road you will find one of the most espectacular view points or all the Pyrenees: Mirador de Roc de Quer, stunning! Not to be missed. This climb was included some years ago in some cycling tours named as Collet de Montaup.

- Els Cortals d'Encamp. Very steep climb leading to the intermediate station of Funicamp (Cable car belonging to Grandvalira ski station). It is a cul-de-sac climb (no exit). Details here:
http://www.ramacabici.com/altimetrias/cortalsencamp.htm
Els Cortals d'Encamp was stage ending in Vuelta a España 2015, who won the spanish climber Mikel Landa. Also included in Volta a Catalunya year 2003
- Engolasters and La Comella . Engolasters is a nice lake close to Andorra la Vella. First time climbed in Eddy Merckx times when the Setmana Catalana multiday race took place on the '70. Not very steep, not very long, but nice anyway. La Comella and Engolasters will be included also in Vuelta a España 2019 including a gravel road for the first time in Vuelta a España.
Most of the climbs described are included in the Granfondo "La Purito", disputed every August since 2017 with a very demanding route (5200 meters elevation in 145 km). If you are searching for a Challenge, this might be your best choice.

Cycling from Barcelona to Girona

Cycling from Barcelona to Girona is a nice challenge, very doable in one day. Putting together the big metropolis of Barcelona with the small Girona, capital of cycling.

Once in Girona you can take the train back to Barcelona. Trains in Catalonia work very well, fast, clean, on-time, therefore in just about 1 hour you are back to Barcelona. Unfortunately, with the bikes you cannot take the high speed train (AVE), otherwise, you would be back to Barcelona in hardly 40 minutes.
The fastest way to do it in a road bike would be in inner and mostly flat roads. The key roads are BV 5001 (Carretera de La Roca), C-35 (road to Hostalric) and then leading to Caldes de Malavella, Sant Andreu de Salou, Fornells de la Selva and Girona.

But the route we suggest today is in some gravel paths and solitaire roads. Very safe and adventurous way to get to Girona. For some parts you will take the very popular greenway 97 km long that links the Pyrenees (Olot) with the coast (Sant Feliu de Guixols). Lovely path that we take for some km on our way to Girona.

If interested in any of these rides and also in bike rental (being road or gravel) you can contact us at https://roadcycling.barcelona/bike-rental/ .
We can also provide the gpx files to upload to your gps device.

And now, by the way, it is good to remember that in 2009 Le Tour de France did a stage Girona Barcelona, in 181 km. This is a very good choice for die-hard cyclists, getting some of the best roads in all of Catalonia (coastal road from Sant Feliu de Guixols to Tossa de Mar), and also some nice climbs close to Barcelona (Collsacreu, La Conreria).

Multiple choices to put together by bike those 2 nice catalan cities!
Publicado por Claudio en 2:52 AM No comments: