The best Granfondos in Catalonia, which one is for you?

Nowadays in Catalonia we have many Granfondos, to discover some of the best roads around. Also to try to go fast and beat your club mates. Here we will suggest some of the best sportives organized in Catalonia, from our point of view. All of them are really worth, and remember, this is just a sample, you've got a lot of choices...

Terra de Remences:
This is a classic sportive, the most popular all over Catalonia. The route is simply perfect. There are 2 choices, the short version (95 km), including Coll de Capsacosta and Coll de Canes, and the long versions including an extra loop about 80 km long with Coll de Bracons and Coll de Condreu, a couple of very interesting climbs.
In short:
Website: http://www.terraderemences.com/
Starting point: Sant Esteve de'n Bas (close to Olot)
When: 13/5/2018
Distances: 95 km (short) and 176 km (long)

Els cuatre cims:
It was organized over 20 years ago and then just since a couple years it is again on the catalan calendar. One of our favourite climbs (Coll de Creueta) reaching almost 2000 mts, and the very steep Coll de Pal are the highlights of the route. The climb to Coll de Pal at the end of the route, with over 150 km on your legs, is a real challenge...
In short: Website: http://www.4cims.com/
Starting point: Bagà
When: 1/7/2018
Distances/Elevation: 162 km, 3600 mts elevation

La Ruta Minera:
No doubt the highlight of this route is Coll de Pradell, one of the steepest climbs you can find all over Catalonia. The famous section at 20% is one of the classic "survival" sections to struggle while climbing.
In short:
Website: http://www.larutaminera.org/
Starting point: Berga
When: July
Distances:154 km (3800 mts elevation) or 116 km (2800 mts elevation)

Gran Fondo La Mussara:
Organized for the first time in 2015, in just a couple years it has become a very popular meeting point for catalan cyclists, also for foreigners to discover a real paradise for cyclists, as Costa Daurada, close to Tarragona (south Catalonia) .

The toughest cycling climbs in the Pyrenees

It is very difficult to make a ranking of the most demanding cycling climbs in the Pyrenees. Some days ago was unveiled the Tour de France 2018 route and one of the new climbs included is Col du Portet, said to be the new Tourmalet by the TdF director, not a joke... Still to be asphalted the last part (so far it is just asphalted to Pla d'Adet, at 1680 mts) this new climb will have real big numbers, and will deserve to be among the king climbs in the Pyrenees.

Vallter 2000, a not-so-known climb in the Pyrenees


Vallter 2000 is one of the gems of the spanish Pyrenees. 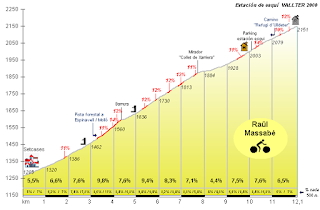 Reaching 2114 mts height, the total length of the climb is 11,2 km from Setcases with 7% average gradient and some full kilometers at 10%. Steep, very steep!

Here you can see the Strava segment for this climb. There is a certain Steven Kruiswijk as KOM... A real climber, no doubt.