Montseny mountain is simply a paradise for cycling. So close to Barcelona (hardly 45 km) and you have a big range of mountains to explore and enjoy.

Being road cycling or gravel cycling, the options are endless. Let's focus today on gravel cycling. And specially in a quite popular place for locals, which is Pla de la Calma. This is a relatively flat zone at about 1100 mts height that you can reach from several places, and specially from the top of Coll Formic climb. Coll Formic is probably the best known road in Montseny (together with the climb to Santa Fe del Montseny). Your reach Coll Formic at 1145 mts height either from Palautordera (26 km ascent from C-35 road), either from Seva (shorter climb about 9 km long. The views from Pla de la Calma are amazing, specially to the Pyrenees on the north side, but also to the Mediterranean sea to the south. Of course the views to Montserrat and its rounded shapes, are also possible, not being far away. 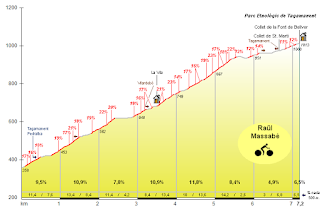 But there are some other ways to reach Pla de la Calma. A very interesting way to reach it is from Tagamanent. This is an asphalted road, very demanding at some parts. The road leads to the etnologic park of Tagamanent and afterwards to the old Tagamanent Castle. The asphalted road ends at about 1000 mts (see profile attached) and then the path keeps going to about 1300 mts. This way you get the whole Pla de la Calma, from Tagamanent to Coll Formic, about 10 km long with stunnig views, always above 1100 mts.

A second very interesting way (probably my favourite) is a gravel path starting at Piscines del Montseny (a little before Montseny village). This is a path in quite good condition climbing for 10 km at about 9% gradient, reaching 1300 mts close to the highest point of Pla de la Calma, which is Puig Drau at 1345 mts. It is difficult to name this side of Pla de la Calma, but the best indication is to get to El Molar, an isolated house (Masia in catalan language) on the way up, about half way. In  my wet dreams, this climb could be included in a professional road cycling race (such as Volta a Catalunya or Vuelta a España), and then descent on the road via Coll Formic. That would be our "Coll delle Finestre". 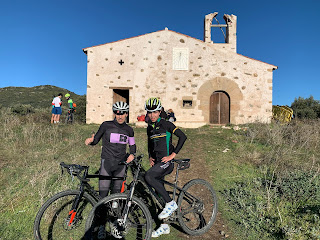 But the gravel bikes allow a much higher number of new places to reach inside the Montseny mountains. One of my favourite places is Ermita de Sant Elies. This is an old church at 999 mts height. The highlight of this climb is the final 5 km stretch at about 10% in a gravel path in quite good condition. Very demanding part though. Considering the whole climb from the Refugis del Montseny, including an asphalted part at the beginning, you get 6,35 km at 10,3% average. Not bad.

On top of the plateau where the church is, you can get a little higher to the firemen observation area with amazing views over the Valles region and even over the Mediterranean sea. Fantastic place, worth a stop.

There is another nice summit you can get nearby which is Turó de la Cova, at 1100 mts height, and you can see one from the other (Sant Elies and Turó de la Cova). The condition of the path is similar to Sant Elies. The characteristic of Turó de la Cova is a bench on top of the climb, which you can sit at, together with a catalan flag. Picture compulsory there. From Turó de la Cova you can descend to Piscines del Montseny, but the path is very rough, and being on the north side it can be frozen and icy in winter.

There are many other options in the Montseny mountains. I'll keep digging, but I am sure this is a good start point. Enjoy!!

Top 10 roads for cycling in Spain 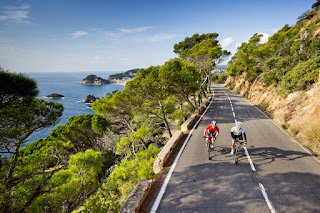 Same as we did a few weeks ago with France, here we go with a list of the best roads for cycling in Spain. Same as in that post about France, let me remind that this is a subjective list.

Following roads are amazing, that's for sure, but I have no doubts that there are other similar ones and maybe better.

This is my choice:

Sure there are other great roads for cycling in Spain, as this is cycling paradise.

Olot, a great destination for cycling in Catalonia

Olot is one of the biggest destinations for cycling in Catalan Pyrenees.

Olot is the capital of the vulcanic region of La Garrotxa, an amazing destination with old vulcanoes, very known for local tourism, but not so many for foreigners. But it is absolutely worth to visit.

The choices are so many. The most popular granfondo (sportive) in Catalonia, takes place in a little village close to Olot: Sant Esteve de'n Bas. It is called "Terra de Remences", honoring an historical fact in history of Catalonia.

But it is not only these clouple of amazing loops that you can do from Olot.There is another granfondo, called 100% Tondo (honouring the catalan cyclist Xavier Tondo who died in a very young age while being professional rider), that starts at Sant Joan Les Fonts (very close to Olot). The final climb of this Granfondo is Vallter 2000, a 1st category climb, included several times in Volta a Catalunya.

From Olot you can also reach a couple of very steep climbs such as Collfred (starting at Sant Privat de'n Bas), which profile you can see attached, and another big (but short climb) is Falgars de'n Bas, with the road in quite bad shape, but also big numbers, very steep climb.

Really close to Olot you can lead to Castellfollit de la Roca, the place to start a couple of very nice (and very steep for some parts) climbs, they are the climb to Oix and Beget (a couple of little villages) through a very nice and quiet road, and the second climb is Colldecarrera, a road through Vall de Bac (Bac valley), with some concrete and supersteep parts. Again, an amazing solitaire road.

Regarding places to stay close to Olot, my favourite place is called El Ferres, a house in Joanetes (starting point of Coll de Bracons). All of our customers love it, and they also love Carme, the lovely lady managing the house, the mum of all the visitors!

We cyclists are always dreaming of the best roads for cycling. Usually big mountains but not only them. Also other kind of roads with personality, with something special that makes most of us be willing to ride them and get another road ticked in our personal list.

The following is my personal list of best 10 roads in France. Did not ride all of them but I did most. And of course I am open to include other roads if they are proven to be better!
France has plenty of amazing roads, a dream for every cyclist. But this top 10 list is hard to beat. Do you agree? Any other road that should be on the list. Comment below!

10 Hardest stages ever in Grand Tours

It is difficult to make a list of the hardest stages in Grand Tours ever. After doing some research, you can read this list of 10 stages showing some of the most epic stages in history. Distance and elevation make those stages very special, and some of them will be, no doubt, in cycling History forever.

I've chosen 4 for Tour de France, 4 for Giro d'Italia and 2 from La Vuelta a España.

- Stage Luchon-Bayonne in Tour de France. Classic stage 326 km long including Peyresourde, Aspin, Tourmalet, Aubisque and the much smaller Osquich. This stage was in the Tour de france route years1910, 1911 and 1912, and opposite direction Bayonne-Luchon (possibly harder as the big climbs are at the end of the stage) was in the years 1913, 1914 and 191 to 1929.
- Tour de France 1983 stage Bourg d'Oisans-Morzine with 247 km and 7200 mts elevation including Col du Glandon, La Madeleine, Aravis, Colombiere, Chatillon and Joux Plane. The winner was Jacques Michaud in an amazing stage with 7 hours 45' 25". In this stage Laurent Fignon gave a big step to the final overall win.

- Tour de France 1992, stage Saint Gervais-Sestriere, 254 km long and 6500 mts elevation, including Col de Saisies, Cormet de Roselend, Iseran, Mont Cenis and Sestriere. Claudio Chiappucci was the winner in an amazing breakaway from km 28, wearing the polka dot jersey. It took 7 hours 44 minutes 51 seconds. Miguel Indurain bonked a few km to the finish line.
- Tour de France 1996. Stage Argeles Gazost-Pamplona, 262 km including  Aubisque, Marie Blanque Soudet and Larrau (and still 100 km to go to Pamplona). The winner was the swiss Laurent Dufaux in 7 hours 7 minutes. Indurain said to be the hardest stage in his carrer. No need to say any more.
- Giro d'Italia 1914. It is said to be the hardest big tour ever with 5 stages over 400 km long. Stage 1 Milano-Cuneo was 420 km long including the climb to Sestriere (this was the hardest stage ever in Giro d'Italia history as per La Gazzetta dello Sport), but according to other souces, stage 6 Bari-L'Acquila was the hardest, with many riders forced to retire.

- Giro d'Italia 1949. The epic stage Cuneo-Pinerolo won by Fausto Coppi is one of the most dramatic wins in cycling history, including the climbs to Maddalena, Vars, Izoard, Mongenevre and Sestriere. Coppi won in 9 hours, 19 min 55 sec. 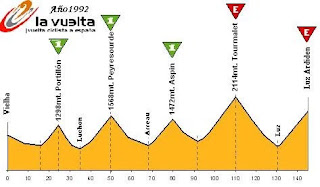 This is my list of hardest stages ever in Grand Tours.
Do you agree? Feel free to share and comment below.
Publicado por Claudio en 8:46 AM No comments:

It is always a hard job to choose the best climbs in a mountain range. Specially a very big one as the Pyrenees, with over 600 km of mountains, being the border between France and Spain..

There are many different criteria to keep in mind to make a list like this one. I chose 2 main criteria: landscape beauty and steepness. I also had in mind other points as traffic conditions. These are my favourite climbs in the Pyrenees:
Recently, the Cyclist Magazine from UK released a top 100 cycling climbs all over the world, and there were 13 climbs from the Pyrenees: 7 of them are in the list here (missing the spanish and Andorra ones) and the nice climbs missing in our list are Soulor (which makes part of Aubisque), Lac de Cap de Long, Aspin, Peyresourde, Superbagneres and Hautacam.

Sure there are many other nice roads in the Pyrenees, I specially want to mention the small basque mountains (Izpegi is one of my favourites), but it is always hard to make a top 10 ranking. I hope you agree with me! If not, comment below!

Usually the french side is longer, steeper and colder, being on the north face. Worth to know this information when planning a cycling tour in the Pyrenees.

Let's have a quick list of all of them, starting from east to west, from the catalan Pyrenees to the Basque Pyrenees.
Now there is no police control on every border pass, but there was a time when it was, not so long ago...