Being so close to France, you may think Barcelona has hosted several Tour de France stage finish throughout the years. But, unfortunately, Barcelona has just welcomed three times the most important cycling race of the world.

- Tour de France 1957 July 15th stage: Perpignan-Barcelona 197 km, won by Rene Privat. In the afternoon was a second sector, a time trial in Montjuic mountain, won by Jacques Anquetil, who finally won the Tour.
- Tour de France 1965 July 2nd, 11th stage: Ax les Thermes-Barcelona, 240,5 km.
Stage was won by the spaniard José Pérez Francés after one of the longest solo breakaways of Tour de France history: 223 km. In a very hot stage, after climbing alone Col de Puymorens, he succeded in stage with over 6 minutes to the peloton.
The day after, the peloton lead from Barcelona to Perpignan in a flat stage, won by Jan Janssen.
- Tour de France 2009, July 9th, 6th stage. Girona-Barcelona 181,5 km.
In a hilly stage, the peloton kept together till Olimpic Stadium in Montjuic, where finish line was installed. Norwegian Thor Hushovd won the stage ahead of spaniards Oscar Freire and José Joaquín Rojas. Barcelona welcomed Tour de France in spite of the rain, with thousands of yellow cards saluting the most important cycling race of the world.
The day after, Tour de France lead to Andorra in a high mountain stage 224 km long.

If you want to discover the same stages that pro riders did when arriving or exiting to Barcelona, just let us know and we will help you. https://roadcycling.barcelona/
Publicado por Claudio en 6:22 AM No comments:

(Pictures by Sergi Ros www.rosdemora.com)
Barcelona is really a paradise for cyclists. For every keen cyclist.
First, using bicycles as a transportation system. Barcelona is a pioneer city about rental service of public bikes. The "Bicing" system has been used successfully in Barcelona since 2007.
If you speak spanish, you can learn more about Bicing system here:
https://www.bicing.cat/es/content/c%C3%B3mo-funciona
Today, Barcelona has over 180 km of bike lanes.
You can download the net of bike lanes here:
http://w110.bcn.cat/fitxers/mobilitat/bici/mapaa22011ok.948.pdf


Road biking? Barcelona is also a great location to ride your road bike. Cycling beside the sea, or climbing the hills surrounding the city. In this article you will have some ideas of places and destinations:
http://www.montefuscocycling.blogspot.com.es/2014/02/barcelona-unexpected-cycling-destination.html

Last, but not least. Barcelona is the main city of Catalonia region, a paradise for cycling. You should be aware that in catalan trains bikes are allowed, so if you need to go in Rodalies Renfe you will not have any problem to transport your bike with you. This way, Montseny mountain, Montserrat mountain or Costa Brava, are much closer, and you don't need to go out of the city through busy roads.
Publicado por Claudio en 11:28 AM No comments:

One of the most famous brands in cycling has arrived to Barcelona. At last Gran Fondo New York has a challenge in one of the most wonderful cities in the world.
Next 2015 March 22nd (just one week after the Barcelona Marathon!), you will have another chance of discovering this amazing city by doing sports.
You can choose between two courses, the short one 110 km (+2000 mts), or the long one 160 km (+2900 meters).
More information: http://gfnybarcelona.com/
If you want to rent your road bike for this event, contact us. We will provide with the best carbon road bike.
Coming from abroad? If you would like to train some days before the course, we can also offer you  other cycling and lodging options, in the city or along the coast.
Would you like a guided training for the course, we can also offer you that!
Just contact us on claudio.montefusco@gmail.com. We will make a customized quotation.
Publicado por Claudio en 10:28 AM No comments: 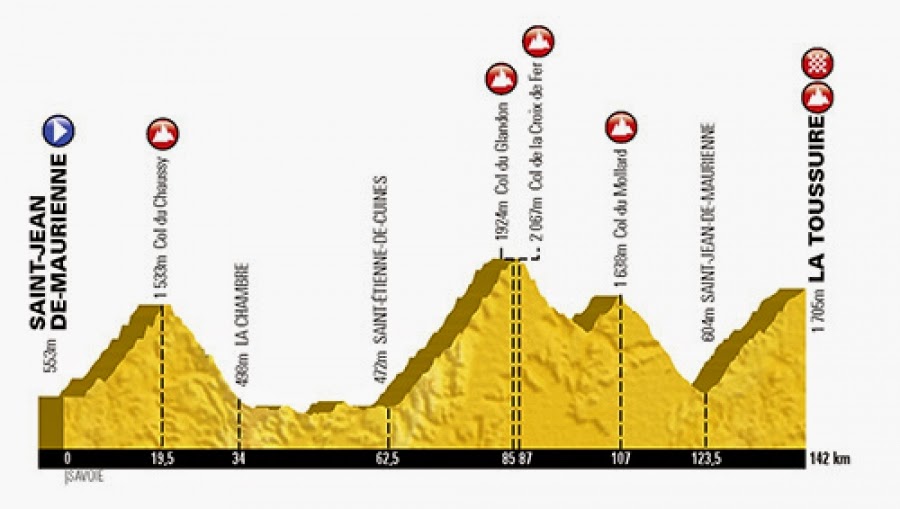 Do you want to cycle one of the most important cyclosportives in 2015 calendar?

The 23rd edition of the Etape du Tour will find place on Sunday, July 19, 2015 in the Alps. Five days before the professional riders you can cycle the 19th stage of the TDF 2015. The route of 142 km is a loop ride between Saint-Jean-de-Maurienne and La Toussuire right in the mighty Alps. The Les Sybelles territory is a fantastic area for great and challenging rides. 19 July will be A big day for all keen cyclist. This day you will tackle the heroic icon Alps together with 13,500 other cycling enthusiasts you will face 4600 climbing meters over 142km! Don’t miss this unforgettable athletic experience: climb the mythical passes of the Tour de France. For that, book your places right now as we have only 20 bib numbers available. This Etape du tour cycling trip sells out quickly so don’t wait too long and sign up now!