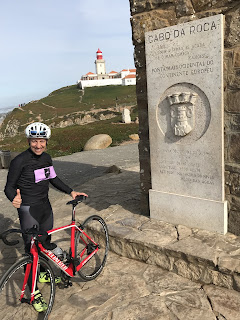 Maybe because it is so close to Spain, or just because it is direct competition of our cycling offer, Portugal has never been a very popular destination for Spanish cyclists (especially for the Catalans). And yet it's a very attractive cycling destination especially in winter, when we have to look for the sun and good weather that we need in the north of iberian peninsula.

Not just for the cycling, but historically and culturally, Lisbon is a world-class destination.
The amount of attractions that Lisbon has to offer is enormous, the Belem Tower, the Jerónimos Monastery, the monument to the discoverers or the the Alfama district are just some of the attractions that we cannot miss. The fact that the metropolitan area of Lisbon, with 4 million inhabitants, represents 20% of the total population of Portugal, gives an idea of the concentration of population in the metropolis and depopulation of much of the rural Portuguese territory.

The food is, of course, another great incentive. Not just the Bacalhau (cod, of course), but also the caldo portugues, the francesinha, all this is a guarantee that it is a great destination for foodies! The wines are also an undeniable quality: Albariño, wine Alentejo in the South or green wine in the North.

The weather is mild even in winter. We had 4-5 ideal days for the tourism and sports activities. Only one day we found rain and some of wind (it might be a problem). In January, for example, the average temperature is 10 °, which is not bad. The proximity of sea makes the climate usually soft. Regarding to the weather in the summer, it would be advisable to avoid the hottest months, not only because of the heat but also for the traffic that is increased significantly.

Lisbon will always be for the spaniards the magical place of Freire's second World Championship, with the ascent to Sefarina and with a fairly hard circuit, a must in Lisbon, the other city of the seven hills, where there isn't much flat, except on the riverside of the Tagus River, perfect for a more relaxed cycling. Lisbon was also the start point the of the Vuelta a España in 1997 (to promote the 1998 Universal Exhibition in Lisbon. They were three stages in Portugal (Lisbon-Estoril circuit, Evora-Vilamoura and Loule-Huelva). By the way, the winner that year was the Swiss Alex Zulle.

But cycling in Portugal equals to Agostinho, the most known Portuguese cyclist with a premature death, still on the bike (he fell in a turn in the Algarve on May 1st 1984, dying 10 days later after not being able to overcome the coma). Cycling in Portugal is also the Volta a Portugal (la Grande) with very hot weather in August. 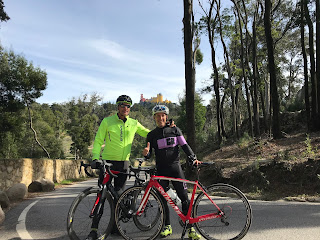 The first cycling day we went to Sintra, declared world heritage by UNESCO in 1995. Depart from Cascais and following the coastline, passed by the famous Guincho Beach (where surfing is very popular) before we went into the Sintra area with some very interesting ascents (tough ones!) which highlight was the curious and multicolored Palacio da Pena. A very interesting area, with narrow roads and many palaces and monuments aside the road (Palacio de Seteais, Monserrate Park). The highlight of the route we did, as well as Sintra, was Cape da Roca, the westernmost point of the European continent.

The second cycling day had to be Montejunto, that we included together with the nearby Obidos, starting at the hometown of Agostinho, Torres Vedras, where the legendary cyclist have dedicated a couple of monuments (see picture). 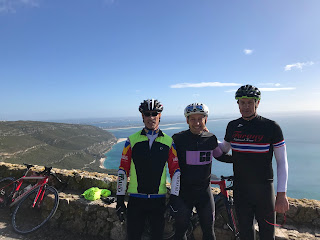 The second real day of bike meant to discover the wonderful Serra de Arrabida. A wonderful coastal road with a magnificent view and where is located the monastery da Arrábida. There are 3 interesting sides, the closer to Lisbon (Azeitão), the ascent from Setúbal and finally perhaps the hardest from the beach of Galapinhos. The highest point of the road is 491 m, with magnificent views over the sea and the Troia peninsula (to the other side of the Bay). By the way, one of the most popular sportives in Portugal in the so-named Troia-Sogres, with almost 200 km along the coast southwards to the most southern point in Portugal Atlantic coast.

At cycling level Portugal is very hard competitor to the Spanish offer. Specifically the Algarve area is developing pretty much and in that area takes place the Volta ao Algarve http://voltaaoalgarve.com/ in February (category 2.1 Europe tour), and also has its touring version, disputed February 17, 2018 from Tavira.

Sportives and Granfondos are developing quickly in Portugal. In particular this year will be held the Granfondo Lisbon https://www.granfondolisboa.com/ of April 22, 2018, with 136 km away

Also the Gran Fondo New York https://gfny.com/gfny-world/gfny-portugal/ has arrived to Portugal, and will be held on September 9, 2018 from Cascais, with 160 km and more than 2,000 meters elevation, with a similar route to the Granfondo Lisbon, via Sintra and up the Atlantic coast. It is no coincidence that also in Cascais will take place the Ironman 70.3 on September 30, 2018, in a cycling route getting through the Formula 1 track of Estoril. Great destination Cascais for cyclists and triathletes!

In short, the bike is a great excuse to travel to Portugal and rediscover all the monuments and the history of this nice country. The golden age of the 16th century when his navigators discovered half the world. Its food and wines. Fado. Does not need to be an exclusively cycling destination in our getaway, but always can take time for a pair of outputs on a bike, don't you think?
Publicado por Claudio en 3:14 AM 2 comments:

Rat Penat (translation from catalan language: bat) is one of the inconic climbs for cyclists in southern Barcelona.
Also known as Plana Novella (the urbanised area nearby) and also know for the Buddhist Monastry on top. Belonging to Massis del Garraf (Garraf range of mountains), Rat Penat is a real challenge for every cyclist. Here you have the Strava segment for this climb:


If you would like to discover this climb we can rent and deliver carbon road bikes in Castelldefels and Gavà, then let's go for Rat Penat climb! Steep, very steep, with some parts over 23%! Rat Penat was included in Vuelta a España route years 2010 and 2013. See the profile attached.


If you would like to discover this amazing climb upon a bike, just let us know and we will rent a bike/guide you, whatever you need. We are ready to help! https://roadcycling.barcelona/